Its not your EGR despite what Dave’s mate  said, its your fuel pressure ! its out of spec. Watch the pressure under live data & you’ll see it fluctuating in concert with the hunting or even sitting way higher than the 230bar target.. Wear in the fuel system components  in combination with old /early  software in the ECU causes this. Get a pump & pilot learn carried out & if the (multi step) process fails two new valves will be required followed by a PCM update  & re-calibration of the injections system to stabilise fuel pressure & prevent the further valve failure.. If you fancy doing the repair yourself or fitting the valves prior to visiting me for the software & recalibration work the PRV is part number 6C1Q-9H321-AB  & SCV 6C1Q-9358-AB, the PRV is a PRV ( pressure relief valve ) but the SCV , (suction control valve) is also know as a vapour relief valve or inlet metering valve..

The kits on ebay , that contain a rail pressure sensor, PRV & SCV, contain a fake ten quid PRV & because of this are total crap.

There are Denso packages PRV’s that come with a spigot attached that you discard, I’ve not tested them yet but they may be OK & are a fraction of the cost of the Genuine Ford packaged part.

On the SCV, there are Denso boxed ones that  seem to be OK. I used to use PF Jones for these but their supplier changed & its no longer a good source. Their fake PRV’s are to be avoided also. Look for this  Nissan boxed part or A Denso Boxed item. The Denso boxes have some red writing usually..

Have a look at this picture, in ebay search for “Nissan 0360”

Tip  – replacing one valve only or missing out a part of the 4 stage software process needed after fitting of valves will result in the problem not being cured completely  & symptoms will return. (Part numbers are for all Euro 4 Transits  apart from 200ps 3.2 which have a differing PRV part number 7C16-9H321-AA ).

Fuel system issues that aren’t dealt with can lead to piston crown overheating & that is suspected in the catastrophic engine failures that blights some (mainly 2.2) Mk7’s so dont put it off too long & don’t fit anything other than genuine Ford or Denso parts ( be careful on ebay as some valve sellers tend to bullshit about their fake items describing them as genuine or OE or original etc. ) The fake valves i have seen have wrong thickness brass washers, different piston length, & Transit Part Centre ( Bounds Green London ) were  selling cleaned up / resprayed used ones as new at one point ! You are unlikely to  get the fuel system dialled in with anything other than original  parts. If the above fix isn’t successful your injectors themselves are probably too worn.. Perform a leak off test or better still send the injectors to Panda Diesel in Hampshire for a good honest bench tested assessment .

Clean out your inlet – even on an engine making good standard power , cleaning the inlet manifold & cylinder head intake ports  ( what you can access of them anyway )  liberates free power & economy… works especially well on Mk6 Models but applies to all diesel transits to date…

Its a filthy process though with all the goo from the crankcase breather & egr systems feeding into it  & you will  need a set of (manifold to head), gaskets , they come as 8 or 10 blue or red oblong shaped silicon seals … cheap Mondeo 2.0/2.2 2001-2006  ones are available as pattern parts from a company called BGM  & are the exact same size & fitment..

EGR Blanking & Deleting replacing the flange gasket from the egr feed  to egr valve with a blank ( unholed !) plate effectively stops the function of the egr valve.. blanking plates are available on ebay for £4.29 or so or just make one yourself. Not from a beer can though, you need something a little thicker !  this works great on Euro 3 (2000-2006) Transits  & Transit Connects but on Euro 4 & later  vans of either flavour it can affect low engine speed performance  & throttle response  & /or  throw up an engine check light  / MIL (malfunction indicator lamp)  on the dash.. the odd van runs ok, depending on your ECU’s particular software version, but all will currently  light the engine malfunction lamp ( check engine light).

On a Mk7 Transit, this sits in the inlet tract a little downstream of your vans EGR valve, its a Bosch unit, look for part number 6C11-9F479-AA or the revised AB version.. its easy to see on front or rear wheel drive vans. Once removed, a toothbrush & little petrol works fine on it.. it doubles as  temperature sensor ( AIT2 ) so a clean one measures temp & boost pressure quicker, resulting in optimum performance. There’s a ceramic coated “bulb” in side with a bright yellow painted tip so toothbrush it till you start seeing the bulb at which point you can use a fine screwdriver to speed up the process..

Fit an intercooler –  to 75ps 2.0 litre TDDI Transit ? unless your upgrading the turbo itself,  or needing to tune beyond 100p, I wouldn’t bother .Of the few i have tested , having no IC  doesn’t seem to be a limiting factor & is a pain as you ideally need a complete donor set of complete pipes to & from it due to differing MAP ( manifold absolute pressure) sensor & EGR valve ( exhaust gas recirculation ) positions…on 75ps 2.4 Transit TDDI,RWD its an easy mod as theres a blanking pipe in place, the intercooler just inserts in place of that. Up your boost once fitted..

Up your Boost  – some models have adjustable wastegate actuating rods, shorten it  & you have upped your boost, ( this increases the volume of the actuating pot at rest &  increases  the tension or preload on the pots diaphragm).There’s a little & useful gain to be had & its generally a safe thing to do ..try 1 turn & test, ( or measure boost) & if all feels good,  increase half turn at a time… if you’ve a gauge/way of measuring,  aim for 10% over stock reading & if not, between 1 & 2.5 turns is a guide.. Universal Turbo’s do a nice hybridising service, either to your spec or a “just make it boost more” option for reasonable money  – If your turbo’s output is controlled electronically however ,(TDCI 125,135, 140, 200) look for wires connected to it ! )  leave well alone… Universal may sell you an adjustable wastegate actuating rod  / vac pot for your stock turbo, this would be far better than a bleed valve type solution as many are crap.. 85/110 Mk7’s have a adjustable rod, remove the vac pot mountings from comp housing & a circlip on the wastegate arm then adjust at your leisure remembering ( lots) more is not always better due to many factors, so get googling for a few hours prior to adjustment! For a good manual adjuster try the Sytec In Car model.

K&N type fiters – 44 quid , wash it once a year, then get 20 quid for it used once you have finished with it, thats free filtration ! i like them & they sweeten up the throttle response.. K&N make 2 filters for  any MK6 plus RWD MK7’s,  & one for Euro 5 2.2 FWD. For FWD Mk7’s Pipercross make a foam filter which sags significantly into the airbox once hot, this potentially make the foams “holes ” bigger & may reduce filtration level.   They have no interest in fixing the bad design – avoid.

Millers Ecomax Fuel additive – buy a regular grade diesel , add a little Millers & you have a premium spec fuel for a quid fifty a tank 🙂 power, mpg & quietness of engine, are all enhanced, a little..

Genuine Fuel Filers ? is it worth using a genuine filter ? Yes as some TDCI use 5 micron, some 2 micron filtration.. when was the last time your plain white unbranded one specified that ? the wrong one for a TDCI, a 10 micron one  ( which fits the filter head just fine!) , will wear the Delphi & Denso common rail injectors quickly & using  a 2 micron on a TDDI will result in lack of power.. Spending £30 quid fitted ( £18 filter only trade )  saves the worry. 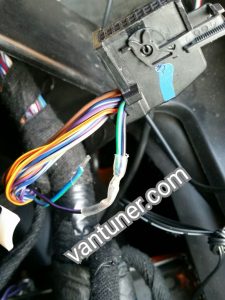 A full or partial delete is now available on all 2006 on Euro 4 connects .

A K&N type replacement  panel filter works well on all years& one filter fits all connects from 2003 to 2013..

On pre 2006 Euro 3 models the stock  intercooler is angled, swap it for the later Euro 4 2007 onwards upright model for better cooling of the turbo’s gases.. the later one sits differently, more upright.. you will need the later return  pipe from intercooler to manifold for sure & may have to extend / re-position the sensor that sits in the return pipe.. dead easy conversion though.

Connects breathe a little hot and restrictively, & a Focus Mk1 airbox lower section is deeper, & has more volume  & comes with a cold air feed or snorkel that goes under the battery to the slam panel. Any tddi/tdci /Mk1 airbox lower section will do & if the snorkel is missing , i believe they are inexpensive from new from Ford.. alternatively , on the stock airbox, remove its pigmy snorkel, open up the hole & fit a cold air feed made from some 3″ or 4″ ducting from that inlet point to the slam panel.

From a maintenance point of view, if the fuel filter isn’t shiny & newish looking , change it, these , like all fuel filters , get restrictive over time & will affect power…

Check the bulkhead mounted MAP ( boost ) sensors pipe & rubber elbows for carbon & cracking & the flexi pipes in & out of the intercooler, the metal rings wear the flexi section & oil seeps out.. silicon alternatives are available much cheaper than originals & you can choose Your colour 😉

Hi Martin, It is like a different van totally, I can hold a higher gear down to 2000 rpm and below which was pretty much impossible before, seems much happier on CC on the motorway in 6th gear no hunting or having to change down a gear when hitting an incline. The above was the main gripe.Acceleration is much better than before through the gears. Can also change up gears earlier or skip gears if joining motorway Etc, but where’s the fun in that. But a van to drive in London the above makes a difference in traffic.Have only driven on Sunday to work in London fuel seems to be better but too early to tell for sure, trip is showing 270 miles done and 240 to empty but gauge is only just below halfway so seems like an improvement, I will report back some more when I have more miles into it, but not the reason for the remap so a bonus if it is better mpg.Only one small minus, seems not as quick from say 70 / 80 mph to 100mph plus as the last MK7 van, but could be the fact that the gearing is so high or to do with the DPF not sure maybe you have an idea? Not sure as only tried it once and may be in my head?But apart from that wonderful so far so good thank you    Many thanks.Mike