( for MK7 Transit just scroll down).

Vantuner offers  MK8 Transit & Transit Custom Euro 5/6 Cruise Control activation as well as MK7’s & on MK8 or Custom ,  essentially it’s a  case of fitting or bringing along a cruise button equipped wheel & having me activate it. Tested so far up to all versions  up to & including model 2018 model year. 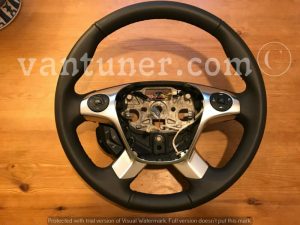 One more is also leather with cruise : 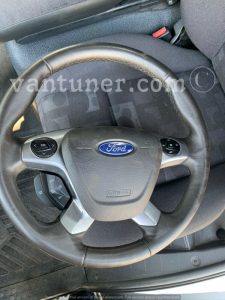 You’ll see that the visual difference in in the right-hand D-pad buttons – , just volume and song skip,  Where possible match the right hand stereo controls otherwise you will lose radio control via the new wheel , in this case, the control pad from your old wheel, the silver trim just pops off & the switch pad can be swapped

Spanish ebay seems to be a good source for wheels with the correct d-pad but its not an issue as the d-pads are swappable as i said.

Another popular wheel has “external” phone  / voice controls, in the same style as the cruise controls, just on the right side. These wheels are best avoided as the wiring differ’s for basic radio control so at best you’ll lose steering wheel control of your ( basic) radio.

Vantuner offers a full range of optional extra activation like switching on factory cruise control, & enabling outside air temperature function on so called “high level” clocks etc.  In most cases, as connectors are usually in place already, its a case of fit the required parts  & possibly add wires ,then arrange for activation.. Vantuner only activates options  / installs  BCM’s /Wheel’s rather than offering a turn-key service including wiring however in the case of cruise control, if you don’t already have the wiring in place ( many do ) only 2 wires have to be added & there are online guides to help specifically with this , see below…

Some  activation’s or cloning can also be carried out by post by sending in Your BCM or “Body” Computer.

There are few different wiring looms specs & body control modules fitted so firstly identify which you have to see if a module swap or additional wiring is needed .If the help below isn’t conclusive, please get in touch to confirm what’s involved on your van..If you have an Ex Rac van or a GLX or Limited model  you are  in luck from the off as a high spec dash wiring & body control module are already fitted to them from the factory, ditto if you have a low spec model but an  optional extra like heated screen or cat1 alarm , heated mirrors or bluetooth already fitted…

Body Control Module Identification – Drop down glove box, at far back & up is the module & on a white label, look for the ID in the format of 6C1T-14A073-CB, CJ etc, the C in that example denotes the high level version , if yours has a B in the 2nd from last digit , EG:6C1T-14A073-BK that’s a so called lower level module, which cant support cruise or trip computer clocks etc..If you’ve only a B series body control module you will need to  get  a C ( or D ) series, which I can fit  & configure here or by post . Do you have a 2012 -2014 (Euro 5) Van ? then you if you dont already have a C or  D you will need a C or D with the prefix CC1T or CC11 as accelerator pedal circuit handling differs on Euro 5 vans compared to those on the Euro 4  –  Here is a picture of a B Series  – 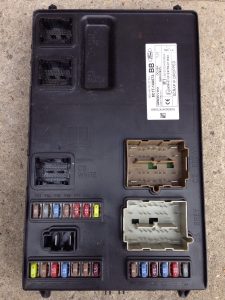 Wiring Requirements  –  some dash wiring looms already have the wiring in place for the cruise. The 2 wires required wiring run from the BCM to the squib connector  near the ignition switch , remove the plastic cowling around the lower  part of the steering column & look for a  connector plug, if you’ve 2 orange wires ( 1 orange , 1 orange w/yellow tracer ) in position 4 & 5 of that connector you have the wiring needed. A video to help identify them is  here . Usually if you find you have the cruise wires the other wiring for high spec clocks & most other optional extras is fitted also.

If you need to fit the wires yourself, locate the ” squib connector” under steering column lower cowling, nearest IGN switch, you ‘ll see the connector has nothing in pin’s 4 & 5 & wires in all other 4 pins, (1,2,3 & 6).

You’ll need to pull the tab on the side of the connector away slightly to be able to remove the cables but you should be able to push the 2 terminals straight in.

On  the BCM itself, it’s plug’s inputs are clearly marked C6, C5 etc, you only need to work on C6. unplug connector C6,  lift flap at the side and slide out green connector, & you can then insert your 2 new wires. The 2 wires you create must be terminated with Ford tip’s & these must be harvested from a scrap loom, grab yourself a BCM connector from position 3, 4 or 6 with a few inches of wire tails from a scrap yard & you ‘ll have plenty as both ends of cruise wiring require the same tip.

For high level clocks you need  3  wires from the indicator stalk connector to the  connector plug at the back of the new clocks, this allows control of the high level clocks menu.. its an easy job with the right metal wiring connector ends, ideally donated from a scrap loom .the type & size of connector you need are used all over the dash loom.. a great wiring guide for cruise & other mods penned by Welsh Transit God “Loot” can be found here. If you are  looking for the steering wheel with cruise buttons , search also for C-Max 2003-2007 or some Kuga as the part is compatible. SOme Focus wheels are also comaptible but its a rabbit hole as some dont so best to get a Transit/Cmax/Kuga one. However with the trip computer indicator stalk, Focus ones are compatible. Try Breakerlink for parts if you are stuck.

The wiring for the auto light switch  is in every MK7, but you’ll need to fit the light/rain sensor in the windscreen as well as the actual auto light switch. Also the light  / rain sensor requires a different loom part which connects from the driver A post to the sensor & central locking pick up sensor. The basic loom just connects the central locking pick up receiver, located in the roof, behind the lining, near the centre.

The sensor fits on the front of the chassis leg, driver side, if you’ve no connector there already fitted ( look for a blanking plug) you need to run a wire back to the BCM for this to work. Also a high level clock set & C or D series BCM is needed. The high level clocks have no buttons on the plastic screen  & a menu  / indicator stalk is required as well if you want the trip computer function along with it’s wiring.

For the simplest  fit  specifically use the wheel pictured from a Transit, C-Max or Kuga – other Focus MK2 ones appear similar & can fit in some cases but can differ internally ,  the 2nd pic of one has its airbag removed. Carry out a steering angle sensor calibration ( with IDS) if you do fit  a non transit one. There are some minor wiring differences on non Transit wheels but amount to an extra earth , just unscrew & discard it. 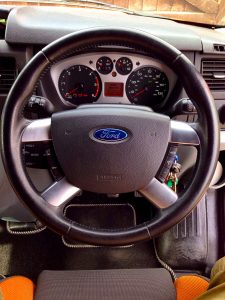 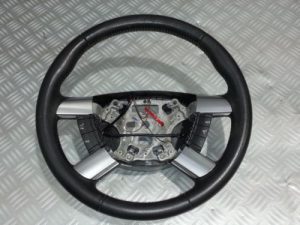 Q- if you have a C or D series BCM ( body control module) already just fit the right steering wheel  & book in for activation.. ( all van’s i have seen with C /D series BCM’s do not require any additional wiring) if you’ve a B series BCM, buy  a used C or D series BCM, fit your wheel , fit if needed the 2 cruise control wires & book in for BCM fitting & activation. Bring any spare keys as all keys get cleared & re-added as part of the new BCM installation.

Q- Can it be done by post ? A – Yes, but only if the van came with a C or D series originally.

Q-I’ve fitted trip computer clocks & the functions all work apart from the outside temp?

A- A temperature sensor is needed & the function needs activating  & that will only work on C or D series BCM’s. Many Mk7’s have the plug ( with a blanking plug fitted ) for the temp sensor near the off side fog lamp on the chassis leg  – The sensor just plugs in there & is the same part on many Mondeo’s also. To wire one in Pin 1 at Sensor (GN/BU) connects to BCM C4-33 / Pin 2 at sensor (YE/GN) connects to BCM C4-24.

Q- Its activated but isn’t working? nothing happens on transits when you press ON, you have to press plus ( +)  & then lamp will light & speed is held & can be adjusted up & down using +/- as normal. Over 1500 rpm & 3rd gear or higher approximately is the minimum speed required. Tried that & still not working ? There’s a clutch position switch (part number 1143409  for £15) which has to be functional, ( read highlighted section at end of the paragraph 1st ) the switches themselves fail or the tang coming from the clutch pedal arm can bend, so not switching correctly. The tang when set correctly is at a right angle to its parent more or less . You can test the function of the switch with the FORD IDS  diagnostic tool or similar in the data logging section for the BCM where you can also monitor the cruise control ( buttons)  function ( the ability to do this is sketchy, sometimes it just doesn’t not show up despite cruise being active)  Look for 200k ohm’s with an instant reduction if OFF, + or – are pressed. If you have that cruise is activated & the buttons are working.  Sometimes the clutch switch circuit will  fault after activation but this will self correct after a a few drives.

Q- The clocks I have fitted seem to work on the trip computer side of things but they reset randomly?

A- 2010 made clocks have a firmware bug which can be banished by a update.

A -Vantuners service  modifies only whats needed  so all ID & VIN numbers still match if Ford plug in all info spec  & VIN etc is correct for the spec of van & module updates or replacements can be carried out  as normal.

Q- I am having trouble finding  C/D series BCM on ebay.

A – Try the Breakerlink used parts search utility for hard to find parts.