Back in 2010, UK motoring magazine Auto-Express opened a discussion about government proposals to limit all vans to 75mph & mentioned Vantuner as a company prepared to remove them….. famous at last as they say;)      Read the full article here

Getting shot  of the problematic DPF is still a popular modification here  despite the possibility of the MOT test eventually including a more elaborate  sniff of the exhaust  to see of the DPF system is working.. You can always get it switched back on of course if ever  needed..

All above models are possible to remove & you have the ( budget )  option to get the DPF  innards taken out anywhere such as the cheapest place you can find or DIY  then just come here for the software modification.. The powder You get out is worth a lot of money to the right recycler…

As well as DPF removal, on Sprinter  & Crafter the engines hardware is the almost identical across all models so a 311 Merc or a 109 Crafter can all be tuned easily to the same level as as the higher output models without pushing anything so a power tune is a great idea to do at the same time..if there’s 50 free horsepower why not unleash it ! 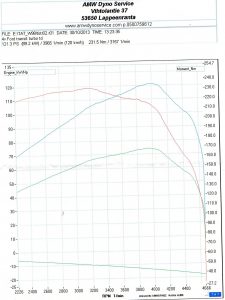 130ps should be possible with further software tweaks & a better intercooler & simply fitting an intercooler  (& matching pipework)  from any Euro4 Connect will offer an improvement to the shabby , poorly angled stock item.

Would a Sytec manual controller work in stead of the electronic one? we aren’t sure but at a fraction of the price of an electronic controller it would be worth trying..

If maxing out your new van isn’t your cup of tea I can alternatively take it to 155ps or on the regular Transit, to 140ps using factory software via a simple exchange ECU..

Warning  – The ECU position on Transit Customs is effectively a water trap so any disturbances must be made fully watertight again. Tuning requires ECU opening   & replacement security bolts etc. Its an involved process compared to most other vans & ecu’s   – It takes longer to do this part ( well ) than it does to actually tune them!

I have seen several bodge jobs with damaged ECU’s  & wrong security bolts etc ,  & 2 stories of subsequently leaking ECU’s costing thousands to replace etc  all done by recognised names in UK tuning so choose your Man carefully on this one!    Vantuner takes time & great care to make the job as invisible as possible..bring a book to read basically 😉

Click here to go to the report  on Fordtransit.org

Martyn, just some initial thoughts on the map. I think You are underselling what a difference the tune makes .It’s like a totally different van. Miles quicker through the gears, huge improvement in pickup in all gears. On the motorway there’s tons of torque and pace and no more gear hopping……80mph then drop to 45-50mph and happily can leave it in 6th.Oh & still maintaining 30-31mpg whilst I’m ragging it its tits off!
Well well well impressed so far! Thanks very much! Super job

Hi Martin, just a quick email to thank you for the work on my van, after driving it for a couple of hours it feels like a different van altogether, very responsive and pulls well through the gears, very impressed. As I said I did a lot of research on this before choosing who was going to do the work. After meeting you and the now seeing the results I made the right choice
Thanks again , Phil
December 2014 – 2012 140 Sport
Hey Martyn, sorry for the late reply, I’ve been really busy. I’m really happy with the van now, 120 it tops out at, 3000rpm but it obviously isn’t geared for any more 🙂 Cheers, Mel.
12 140 Sport, 90.000 miles.July 2015
This is my second van Martyn has done . My 1st was a 90 3 years ago and that was fab ! Now I have a 2012 mk7 sport van and Something had to be done , the van was ok but felt it was it was lacking something ! Now Martyn no longer travels to tune I did a postal remap and WOW !!!! The van is hot …. fuel economy is still 25 but the performance is way up there !!!! This was a 3 day turnaround postal remap and 1st class service again
Thanx Martyn if anyone has a sport don’t hesitate DO IT !
Mike Hereford

2005 130ps 40c13 Iveco Daily immobiliser switched off for a chap who had lost his keys. Local price for fitted replacement ECU, 1700 Euro’s  ! Vantuner immo bypass  / delete service by post £125, return post took 3 days via Royal Mails “Airsure” service. Vantuner can switch off the immo on most Iveco models including ones with ECU number  0281001537 or 0281011228, look to the right of your battery for the number , attached to the ecu on a silver label.. see main article here

The Boxer & Relay 2.2 2006 on 100/120ps & 2.4  Land Rover Defender 2.4’s have the same EGR control bytes in their ECU as the Transits that use the same “Puma” engine.. so its possible  to delete the EGR function from the system..   With the EGR delete itself worth up to 1mpg on  good day, this could be a worthwhile conversion..

If your EGR valve is faulty or you would rather deal with it before it breaks Vantuner offers a closure / delete service available for all Mk7 Transits 2006.5 onwards.. The EGR fault blights all models of Mk7, so 85, 110, 115, 130, 140 & 200ps & causes, hesitancy, smoke, poor economy & whilst its faulty your intake will clog, making all symptoms worse. Note – whilst a stuck EGR will contribute to a hunting ( uneven idle ) problem, its not the cause, for that you  need the Fuel Pressure Fix

Once deleted you will a have sweet runner gain & no MIL  / Engine Check light .. Plus your engine will run more efficiently & you will no longer face paying ridiculous ££££ for new EGR valves..

I have 2 solutions available, one for if your valve is currently OK or starting to fail  returning P0404, P0403, P1102, P1103 dtc’s etc & one for if you have a failed / motor stuck problem returning P1409 dtc. which involves disabling some DTC check routines… whilst the Vantuner EGR delete deals with the ECU electronics, if there’s any doubt as to if your EGR is closing correctly , we fit these blanking plates as well.. If you want to fit a plate yourself, use these from eBayer Bertye1958, they are of very good quality & fit. Fitting yourself may help you work out of your EGR is actually faulty prior to visiting me for the software change, although the engine check lamp will normally light up after some miles once a plate is in place ( on some engine software versions it wont ).. EGR delete is also available for other cars & vans  & costs from £100 – Call for advice on 07956 555 666 ( office hours only please 😉 ) 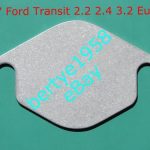 This picture below is a cleaned EGR from a Mk6 Transit 125ps Jumbo Minibus, we cleaned this out along with the inlet manifold. This is a great job to do if your’e in search of economy on a TDDI engine. The bus in question is a local scout groups transport that give low twenties at best to the gallon. The groups other van, a jumbo with the same engine, returns late twenties so we read the panel vans ECU file, loaded that into the minibus then tuned that for max torque. 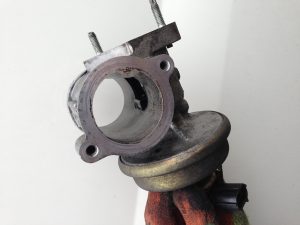 100mph limiter ? easy ;)…. a 60 or 70mph one that a main dealer cant remove with the dealer tool ? now thats the tricky one.. I’m ashamed it took me 2 years to get  a solution sorted but its finally cracked using a good ( rather than hack) method.. now tested good on econetic models. If you have one of these sticky limiters on a regular transit, or any transit  econetic model,   kindly form a que just over there please…

Dog slow tippers & crew cabs seemed to be the flavor of my diary this Year (2012), & most  have been based in & around Hertfordshire – been programming in about a 35% gain & in most cases seem to get it, torque wise. Should  get some MPG feedback in a month or so..

July update – 1 customer, Ben from Bexley Heath, saved about a third on diesel on his usual run to & from Worthing to race his stock car.. Not a scientific or double blind test but  exceptional MPG gains happen from time to  time, especially if you have gone from foot to the floor 90% of the time to needing maybe half that…

Check out this beauty ! amazing in red with graphite alloys, but the mrs & my accountant tell me i cant have one 🙁 at least I get to tune em 🙂 )